11.1 – The big bang: birth of the pure artistic phenomenon

We shall attempt to analyse the human being’s greatest moment, when creativity comes into play. It should be noted that there are different “degrees of creativity”, in accordance with mind-brain-nervous system involvement. Beginning with the lowest form, we can identify:

We have examined the various types of creativity, in accordance with the brain areas affected. They are obviously related to different artistic results. However, it should be recalled that a great work of art is never the result of only one kind of creativity, but rather the harmonious and highly balanced mingling of the three kinds listed above. This does not exclude the possibility that an artist only rarely achieves harmonisation of these components, actually, sometimes through laziness, calculation, or habits acquired later, neglecting deeper meditation, which could lead him/her to the “automatic” synthesis sparked off by the true “big bang”, surrendering to the most convenient component at the moment (usually of the elaborative or re-working rational kind). When this happens, the artist only follows the “academy”, limiting him/herself to “self copying”. But if we are dealing with a great artist, the public will be satisfied nonetheless, because his/her discursive “style”, touch, brilliant rational inventions will hide from the majority the inspirational emotional poverty of his/her work. Picasso the “great artist” is only really “great” in some of his works, characterising his various artistic periods. But, even in his works with no “archetypal creativity”, his drawing, colours and his way of carrying out a rational synthesis, making it appear to be true inspiration, reveal his extraordinary personality.
In the same way, Mozart was not always in top form, because, being such a great joker, often simply provided what he was asked for (conventional music), putting himself to far less psychic effort. But when he wanted to stretch himself to the maximum, he reached the greatest heights, even though this was not that easy in his century, inclined more to re-working fancy and manner than deep-rooted concentration.
So, in our view, analysis of the artistic level reached by a work cannot neglect:

As we already said, Great Art certainly should show the signs of “a sudden flash of awareness” which has evoked and “turned into archetypes”, in a unique way, sets of emotional archetypes, and also the signs of extraordinary rational re-working, together with autonomous elaboration, so as to form an exceptional complex, where the three above mentioned components are flanked by original expository and compositional logic, as yet unseen, and difficult to achieve in centuries to come, even though the necessarily derivative “school” will only shed light on these qualities later, attempting to codify them in rational canons. This will favour both the emergence of mannerist disciples and artistic rebels, who, reaching the greatest heights, will repeat the Great Experience in an innovative way.

13.1 – The basic structural language of music and the other arts

14.1 – The development of musical elaboration in the archetypal hypothesis

15.1 – Nature and art. The world of ideas (and universal memory) as sources of emotional archetypes.

The materialist and spiritualist hypotheses on the reality of human beings.
Considerations on human ability to express the mystery of Art, and thus of Music, would risk being interrupted at the half way stage, if we were not to make some reference and formulate hypotheses on its genesis and reality in nature. The general framework needs to be put together, in order to endow the vast evolutionary process of which we are protagonists with meaning.
The first consideration that immediately comes into view is acknowledgment that Art is not an abstraction of Nature, our “mental invention” aiming at imagining and representing our capacity to approach aesthetic perfection, but, by means of “supplemented archetypes” (which are actually “granules of concentrated Art”), enters each of us as a basic component of all our emotions, thus being an intimate part of nature, of our nature. Why then aren’t we all “artists”?
The reason is that, in order to spark off the artistic recall by means of the big bang, deep-rooted meditation is required on what we would like to express, accompanied by cultural gifts, specific determination, concentration etc., which are not part of everybody’s make up. These qualities are acquired by a long rational-mental and “physical” process, bringing about the required cognitive skills, methodologies, technologies and means of expression. Nevertheless, all of us, to a greater or lesser extent, can “recognise” true Art by means of our archetypes. It should also be pointed out that the definition of “Art” should be extended to the whole field of what can be known and expressed, where extraordinarily original results can be attained. The “trigger” is, however, always the same: concentration followed by the unconscious big bang.
A further essential consideration concerns the need to investigate scientifically our way of being, our very existence in relation to what appears to be outside us, but may not be.
We will attempt to base what we are going to say on scientific grounds, admitting, when necessary, that some hypotheses are not yet backed up by scientific findings. We will also point out fideistic hypotheses used to illustrate various current philosophical-religious conceptions. Unfortunately science is in its initial stage with regard to human conscious and unconscious perception and the required relations with “what can be perceived”. If our non computational archetypal acquisitions are, as we believe, of a psychological nature, what “external reality” does our psyche communicate with?
The real world, our “universe”, the space and time in which we live all seem to lie at the origin of our perceptions, which reach us “clothed in matter” and strike us, remaining permanently imprinted, but among them there are those that cause us to “vibrate”, implying “emotional feeling” and which endow us with “consciousness of feeling emotions”.
Let us try to list the aspects of reality that appear to be necessary for explanation of the complexity of the human psyche, which we have conceived as having a conscious and unconscious mind, with qualities for acquisition and containment of the computational, non computational, structural and emotional.
Were real ideas already present at the birth of our universe (the physical big bang) and life? We believe that this is the case and that the basis of everything is a “Universal Container” supplied with a “memory” (called the “World of Ideas” by Plato), holding the original emotional Archetypes, but also the logic required for their continuous re-working and use.
We have seen that archetypes have “skeletons” of the logical-mathematical type. This leads us to suppose that “pure mathematical forms” make up the “heart” of the World of Ideas. This “world of pure mathematical forms” was reflected in our “physical space and time” conceptually structuring the Universe we live in and placing itself at the base of its “physical laws”, at the same time taking charge, during the course of human evolution, of the “rational construction and structuring” of our minds (Penrose 1994: 452-458) (operational formation of the brain neo cortex), by means of the continuous, successive “metabolisation” of the gradually imprinted emotional archetypes, from which the mind itself drew the logical, numerical and structural archetypes. 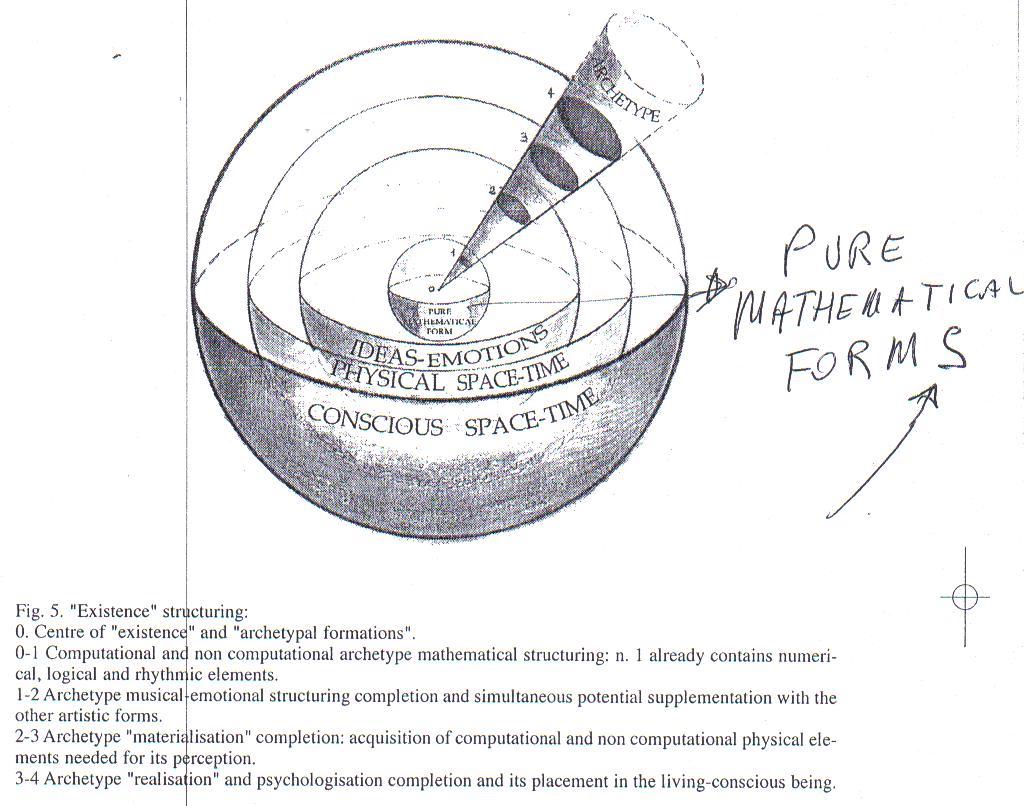 Nature as mimesis of Art: this is the view of Plato, who believed that ideas absolutely precede any sensory manifestation of them and are infinitely more complete and perfect. When an artists copies (or mimes) nature, he/she is doing something wrong and insignificant i.e. making a copy of a copy.
This view, which we would call “aesthetic excess”, lacks awareness that it is only by means of sensory manifestations that we can be conscious of and recognise the existence of ideas, which, otherwise, would be unknown to us and thus of no use. As far as the artist is concerned, one thing is “computationally copying reality” and another is surrender (by means of the subconscious) to a “violent blow”, the big bang straight from emotional archetypes, which are something like the “quanta” of the world of Ideas. Probably, only “self-conscious science” (Leroi-Gurman 1982), only new physical theories based on non computational mathematics and able to thoroughly describe the irreversible nature of space and time originating from complexity phenomena (Miller 1975) presiding over numerous non-living manifestations (physical big bang, phase transition phenomena, spontaneous interruptions of symmetry etc.) and living ones (from inanimate to living matter, from the living to the conscious living in its different degrees, to “organisation” phenomena etc.), only the definitive abandonment of the “stranglehold” of the computational mind, which has become something of a “scientific prejudice”, will allow an interpretative forecast of the state of our reality.
For the moment, we must go beyond the “stranglehold” with the help of non computational ideas/emotions. It is here that the contribution of Music is decisive, seeing that its “sphere” is essentially one of “mediation” and is a link between the sphere of pure mathematical forms and that of ideas/emotions. Musical archetypes are the structural basis and pure language of the conscious mind and, in our view, are the only possibility for (genetically guided) re-acquisitions of human intellectual qualities from conception onwards.

Fabio Uccelli was born in Florence (1932). He was a researcher at the Italian Institute for Nuclear Physics (INFN) from 1960 to 1970, and a fellow of the CERN Centre in Geneva and the Italian Centre for Nuclear Energy (CNEN) at Frascati.

He was awarded a PH.D in physics in 1969. He was Professor of Physics at the University of Pisa from 1976 until his retirement in 2002. He was a member of the Board of Directors of the Teatro Comunale Opera House in Florence and President of Conservatoire “G.Puccini“ in La Spezia.

He has researched in the fields of particle accelerators, solid state physics, renewable energy technologies and musicology.